commit to the commute

So, last night after coming home from a concert - wow - if you get a chance to see the Carolina Chocolate Drops, don't miss them, especially if you like old-timey, string with some roots blues... I can't describe it enough...

Oh, yeah, after getting home, with the temps slowly climbing, decided I wanted to bike into work on Monday (today). Guess I missed the forecast. Did anyone else know it was supposed to snow overnight? Not me. As I sat at the table this morning, I asked Jon the question: riding or driving? Riding.

See, even though we had over four inches of snow in the driveway (more in other parts of the route) it was my last chance to ride before I head off on a non-cycling trip later this week. I left on the Pugsley a bit before Jon, pedaling down the street on the way to the trailhead and on to South Anchorage. The temps were single digits, but it was above zero before 11 a.m. for the first time in a couple weeks.

One stretch of the commute was Lake Otis bike path. The snow was pretty deep and I followed the track of a lone cyclist who had biked in the opposite direction. The rider's pedals repeatedly tapped the top of the fresh layer of snow on the uphills and the left pedals scraped a line atop snow all the way down the hill that I was then climbing.

The best sight was about half-way between Abbott and O'Malley roads. Through the spray of snow kicked up by traffic in the road, I saw the path plow - really, more of a path snow-blower. He was coming my direction, heading up the hill, blowing the snow into the trees. "Yeah!" I was so happy to see him!

I stopped to let him pass. 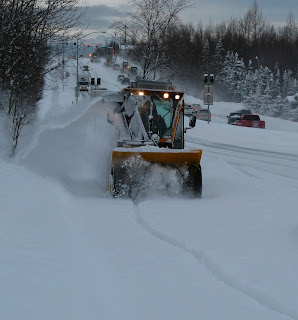 It's the second time this season I've crossed paths the snowblower. I don't know his name, but I sure appreciate that he was out there doing his job so I could get to mine. Thanks!
Posted by bikegirl at 11:46 PM

I see tracks leading right into the mouth of the trail clearing machine. Hope she/he made it out ok.