wouldn't want to overdo it

The optimism at the beginning of the week turned into a quest to not catch the bug that was going around at work. Two people, including Jon, each spent their two days off sleeping. Yes, sleeping! So, with the bug going around (& I usually catch whatever is going around), I decided to be on the safe side and not overdo it.

Maybe I can blame January because I slept extra, ate more and drank lots of fluids. And watched the conditions outdoors freeze and the snow pile up again. I think I missed the worst of that bug so I'm hoping next week will be better with more commuting days.

We're also gaining around 5 minutes of daylight each day. I notice the upswing every day around 4:30 in the afternoon when there's more light outside. Upswing, indeed. 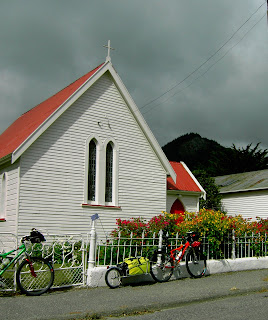 Since I don't have a new picture this week and I've been reminiscing about our trip to New Zealand this time 4 years ago (oh, to return to NZ!), I'll leave with a picture from that trip.

This is in Havelock, on the South Island.
Posted by bikegirl at 8:08 PM