As we headed out of Riga late that Tuesday afternoon Marcis asked if we wished to visit the site of a memorial to victims of the Holocaust. I told him I wanted to go, and that's how we came to be at a site I'd not heard about (there are other memorials in Riga), the Salaspils Memorial. 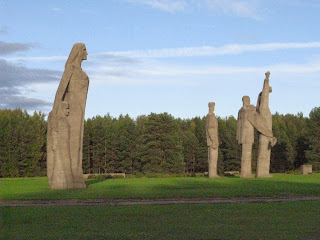 No other cars were in the parking lot. We walked an overgrown path through the woods toward a horizontal cement structure that formed a bridge over the walkway. We walked under the structure, and then through its entire length before entering the field-like grounds. To know that people had been taken there, housed there, died there brought me to silence. From a metal structure partway down a path a faint sound, the rhythm of a heartbeat, pounded. It became more clear the closer we got. Representing the heartbeats of how many people? It's unknown. The sound resonated as we continued. 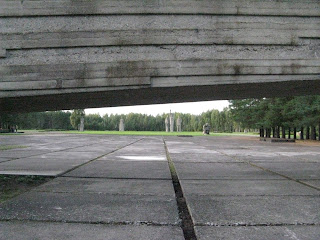 We walked around the path, then across the grass toward the towering concrete sculptures. Representations of oppression, defiance, protection. All in the Soviet modernist style. Mostly, I walked quietly. Janis translated a few inscriptions for us and his view of the memorial was clear. A memorial about defiance against oppressors built by Soviets during a time they occupied this very nation? Latvia has only been independent from the former Soviet Union since 1991 and it is still climbing out of the years of difficult times. Visiting the memorial with our friends certainly added another layer of meaning that other visitors may not have gotten.

As the air cooled, we returned to the car and the highway to Jaunkalsnava, following the Daugava upstream. The sun was setting when Marcis suggested another stop. The Koknese Castle Ruins stood along the banks of the Daugava, just upstream from a dam. According to the web, the castle was damaged in 1701 and never rebuilt. We gazed at the uneven stones that made up the walls and doorways. We carefully walked through arches, climbed to the top of a wall. The light continued to fade. When I lived in Milwaukee, I met a couple whose son died when he fell from a castle in Germany. I remember at the time wondering, "how does someone fall from a castle?" Between the fading light, my recurring vertigo and that sudden memory of a story from over 20 years ago, I decided to carefully make my way down the damaged steps while there was still enough light to see.
On our journey between Riga and the village, we learned a little about how people drive on two-lane roads in this part of Europe, in particular, how they pass. If you should wish to pass, just get very close to the driver in front of you. No worries if there are oncoming cars. The driver in front is going to veer onto the shoulder and the oncoming driver is going to veer onto the other shoulder and you, my fearless friend, are going to squeeze between them straddling the center line! I don't know if I could do that, but I suppose if I lived there I would. After a while, I had to stop looking at the road, especially as darkness set in. Soon enough, though, we were safe at Janis's mom's apartment in Jaunkalsnava.

We met Janis's mom, his niece, his nephew's fiancee and their little daughter. All were waiting for us to arrive so we could have a feast together. We offered beers and some dark rye bread we had purchased at a bread factory next to the highway. We ate potatoes, tomatoes, homemade cheese, meatballs. Chocolates. I don't remember it all. So much food, and we were happy to have it after another full afternoon.

Our next day was filled with errands, including a trip to the larger town of Madona where Janis could get new tires for the car and we could get other neccessities for the trip. After spending half the day in Madona on our tire quest, we headed home to the village. But first, a few stops. Would we mind visiting a cemetery? Not at all. We walked to the gravesites of ancestors. Janis's aunts, uncles, grandparents as light sprinkles began to fall. After that, we stopped by an old church ruins.

Janis shared the story as we walked around. When his Mom, Vija, was a little girl of about four years old she and her family attended the Kalsnava Lutheran Church. It was during the time when the Nazis occupied Latvia. But as in other countries, there were many resistors. According to Vija, in 1944 the Nazis bombed the church because its tower was used as a lookout for the resistance. After the Nazis came the Soviet era. The church was never rebuilt. She did tell us, however, that sometimes concerts are held inside the walls of the old church. I can only imagine what it must be like to listen to musicians playing between those walls on a summer's evening!

Back at the village, we picked berries from the garden, ate tomatoes off the vines in a small greenhouse, helped move hay and watched as Vija milked one of the two cows she keeps in a small barn near her apartment. (If I had been raised a farm girl I would have stepped in to help her out, but, alas, this Wisconsin girl has never milked a cow.) 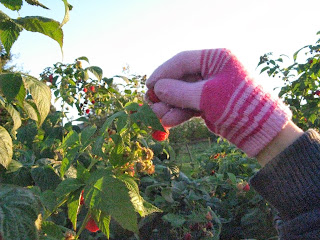 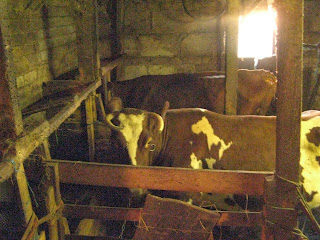 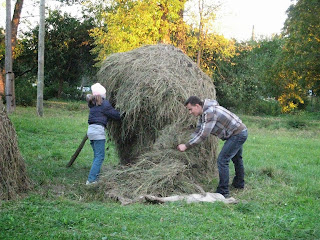 In the morning, Vija insisted we go into her storage room in the basement of her building to pick out some food. Jars of food she had grown and canned filled the shelves. Apple juice she had made, pickles, pickled tomatoes, jarred apples, honey. I can't remember all of it. We packed it in a box along with our remaining rye bread, fresh apples and tomatoes, food we'd purchased in Madona, some utensils, herbs to brew tea. Jon asked about cheese. Vija makes cheese with the milk from her two cows. She handed me a warm, dome-shaped mound that was wrapped in plastic curing on the kitchen counter. Wow! The traditional cheese is filled with caraway seeds (which in Latvia is called cumin, but is not the same as our cumin.) What a great gift for our trip! Once the car was packed, we said our goodbyes, too soon, and headed off.
Posted by bikegirl at 2:22 PM