looking up in riga

Riga is known for its Art Nouveau buildings (it's part of why it is a UNESCO World Heritage Site), so we headed for Alberta Iela (Street) where many of the buildings are clustered. I'm not an expert in architectural styles. We had been calling this Neoclassical, but upon further research, I've learned it's called Art Nouveau, though the architecture of Riga has examples of many styles. Some of them are in disrepair, some being renovated and some look almost new. All these photos were taken by Jon because I was mostly looking around and keeping my head under the umbrella. 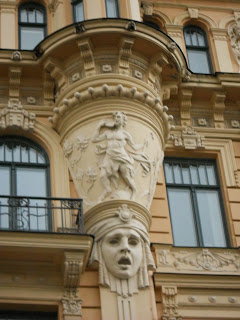 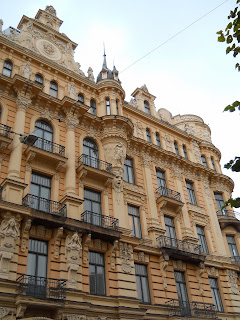 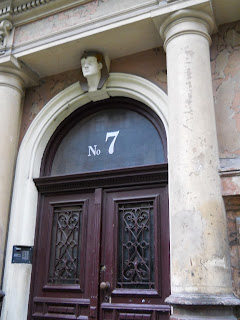 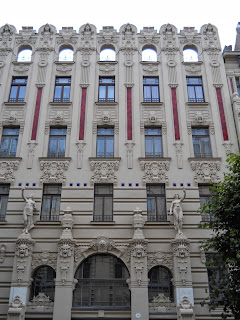 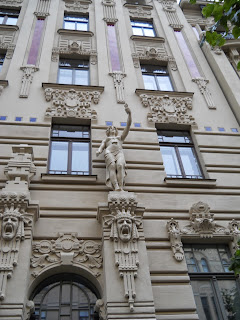 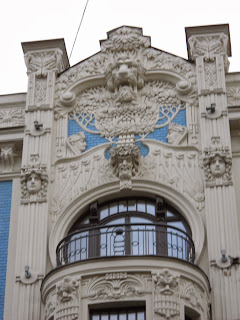 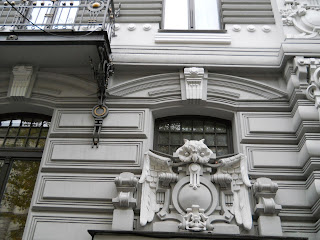 That evening, on our way back to the apartment, we walked past a bike shop that we'd seen the day before tucked in the back of a parking lot. We showed it to Janis and though it was closed, we discovered that upstairs was a restaurant. We walked up to see if there was a menu posted, but instead of a menu we saw platters and bowls filled with food. Beets, salads, soups, pesto, sauce for rice, potatoes. It was all beautiful. We headed back to the apartment to drop off a few things and wash up. While Janis left to meet friends, Jon and I headed back to the restaurant "Eco-Catering." It was so delicious, we ate our fill of the buffet (encouraged by our server to eat more) and then we asked if we could make up a to-go order in case Janis didn't eat enough dinner. The waiter brought a to-go box and told us to take all we wanted, no extra charge, because "you ate so little."

A little bit of magic happens when I travel. There is so much to look at in every direction. Buildings, people, shop windows, streets. All my senses are heightened as I notice smells, tastes, colors. And when I'm only in a place for a short time, there is no boredom, there's no familiar. The mind is always racing and the body trying to keep up. Or is it the other way around? Maybe that's why when you return to a place you've visited before you don't have that same experience; all that newness has had time to become integrated into your compendium of sights, sounds, smells for that place. We had not a moment of boredom in Riga.

The next day we continued exploring and prepared for the rest of the trip. Though it was now Tuesday, Janis's suitcase had still not arrived in Riga. (We'd left London on Friday.) To replace his camping gear we met once again with his friend Marcis who took us to his mother's apartment where he still stored some of his things. (It seems everyone we met in Riga had more stuff than could fit in their apartments.) Marcis picked us up outside a restaurant where we'd had lunch with another of Janis's friends. The opera music again played as Marcis drove along side streets, then along the edge of the city (or so it seemed) and parked near a tall, Soviet-era apartment building. Don't leave anything in the car, they told us.

We pushed the button for the elevator. When it arrived, the sign said "maximum 3." The four of us squeezed into the tiny box and rode up to Marcis's mother's floor. He unlocked three locks on the apartment door, opened it, then proceeded to unlock a second door! Between the elevator and the doors, I again felt like I was playing a role in a movie. Yes, the hapless, unsuspecting foreigner. Where are we going this time? Inside, Marcis dug through his old room (where he lived before he was married), pulling out oddities like a Viking helmet and various medieval implements. We looked at the view from the balcony; I'd momentarily forgotten about the crumbling balconies we'd seen on other Soviet-era apartments and quickly returned to the indoors.

Marcis and Janis gathered camping gear we thought we'd need for those occasional nights when we would camp along the trip. After another stop to pick up our suitcases, we made one last stop before we left the city: Janis's sister called and asked him to stop by her workplace so she could give us a tour. She has studied art and works in a ceramics shop that makes souvenirs that are sold in local shops. At the end of the tour she showed us boxes and shelves of ceramics, all hand-painted, that were ready for shops to purchase. Later, I wondered if we were expected to buy something and I regret that I didn't at least get a little magnet featuring one of the city's emblematic rooftop cats. But we were ready to be on the road and we motored away, with Marcis driving us to our friend's hometown of Jaunkalsnava.
Posted by bikegirl at 6:47 PM