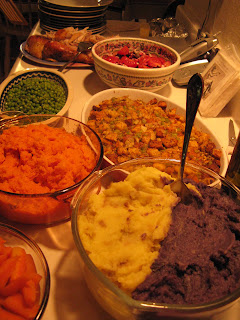 November temperatures have plummeted, leaving Anchorage below zero for several days, with a slight respite on Sunday when it crept to 10 above and some declared it a heat wave. We have over a foot of snow, which I much prefer to last year's chinook when the streets were a glaze of water-covered ice. That was the day I drove to the Valley to pick up our Alaskan-raised turkey for Thanksgiving dinner.

There will be no local turkeys roasting in ovens this year (unless people raised one themselves) and as our guest list grows, I imagine we bought too small and may need to grill a little salmon to supplement the turkey. Whenever we host Thanksgiving, we seem to invite so many people that some of them need to bring their own plates. Even though I usually like my quiet space, on holidays, I think I revert back to the chaos of my childhood when there was a house filled with all us kids and maybe some cousins, aunts and uncles.

Up until a week ago, we weren't sure what we were doing. My sister moved away from Anchorage to Montana earlier this fall and my niece and nephew plan to spend the holiday with their dad. We hadn't received any invitations, and it was only after Jon bought one of the smallest turkeys at the store that I suggested we should figure out what we were doing. So Jon started asking people at the shop and I invited a couple friends who didn't have solid plans. The list started growing and is open to expand.

As the guest list grows, I look forward to the house being filled with conversation and laughter and food - all the makings of a traditional holiday, with the Alaskan twist.

I haven't been in the Lower-48 for the holidays since I moved here in '94, but I'm sure not much has changed in how most people spend holidays there. Many go back to their hometowns to be with family, several generations gather around the dining room table. Card tables are set up to handle the overflow. It's a little different here. Sure, plenty of people have extended families here, but lots of people don't and many of them don't want to deal with the hassle of traveling to visit family Outside* during the craziest flying days of the year.

So people build their own families for celebrations. Co-workers who have become friends. For us, biking friends. Where in the Lower-48 people feel a little awkward being the 'orphan' invited to a family gathering out of sympathy (also common for chechakos** to feel this way), here it's an attempt to create a community and maybe it's a way to support each other as we begin settling into the darkest, coldest time of year. I think everyone should have a place to go for Thanksgiving. I love these gatherings that bring together people from different backgrounds and geographic regions for a big feast. It's as Alaskan as blueberry pie.

*anyplace in the United States except Alaska and Hawaii, aka 'The Lower-48.' Not to be confused with: 'It's 20 below outside!' where the word is not capitalized.
**a newcomer to Alaska (similar to greenhorn or tenderfoot) Opposite of a 'Sourdough.'
Posted by bikegirl at 9:53 PM