why, look at the moon! 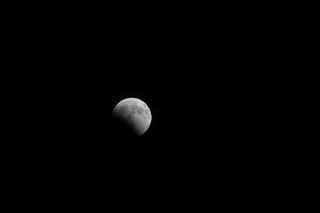 December 20, 2010 - start of the lunar eclipse.
Last night and early this morning, thousands - maybe millions - of people on our spinning orb stopped what they were doing, turned their faces to the sky and looked at the Moon as the Earth's shadow cast itself across its surface. The Moon slowly grew dim, making one of the longest nights of the year in the northern hemisphere a little darker. Yet spirits seemed lifted as the eclipse played out.

I watched the beginning of it as I shoveled a skiff of fluffy snow from the driveway, glancing up every minute or so to watch as it progressed. Jon arrived home and agreed to join me for a walk. Our tenant, Dave, decided to go along. We strolled down the hill to the bog where the trail had already been packed through the fresh snow. We watched the eclipse's progress from a boardwalk before moving on to a large field. At least three other groups of people stood alongside the snowy field watching the eastern sky, some taking photos, as the Moon changed to light orange. 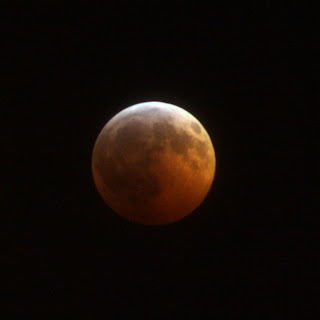 Lunar eclipse
After we walked home in the 4 degree night a haze of clouds moved in and obscured the sky.

I logged onto facebook and was surprised by how many of my Alaska friends had posted their eclipse-watching experiences in their status updates: "watching from my hot tub," one said; "in my living room," said another; on a mountain; from the edge of a canyon. The fact that the eclipse corresponded with the solstice and that the skies were clear may have contributed to all the people out there experiencing the celestial phenomenon. Because often people just ignore the Moon.

Why look at the Moon? I sometimes wonder. This fall when I was staying at a cabin with a group of friends, I was excited that we were there during the full moon. When I urged one friend to stay up late to see it, she quipped, "I've seen the moon!" It was funny how she said it and we laughed. But really, why would we want to leave our cozy cabin in the middle of the night to sit on the cold deck waiting for the Moon to appear between two mountains? Do I really have to try to answer that?

Thanks to my niece, Diane Mead, for allowing me to use her photos which were taken at Point Woronzof in Anchorage.
Posted by bikegirl at 11:58 AM

Seasons Greetings to you and yours and I will continue to drop into your blog during 2011.