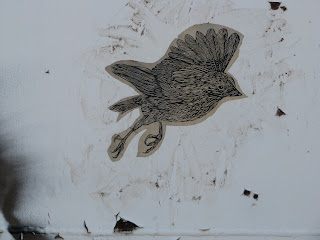 Taking flight along Highway 89, north of Flagstaff, AZ
A couple weeks ago I ran into a woman I've known for a few years. Angela and I had been in a writing class together a few years ago. She's an artist and at the time was looking for feedback on a graphic novel she was working on. We chatted over coffee and she asked if I'd seen any graffiti done by a guy who goes by the name "Meno." I hadn't. (I probably don't get out enough, I suppose.) Then she told me that she wanted to meet him because she had heard he was just a young guy but has incredible talent, especially when it comes to cutting his stencils.

The next Sunday, I turned to the arts section of the paper and there he was. Elusive Meno. Like the UK artist Banksy, Meno didn't want to be photographed. Which is understandable because he's a graffiti artist, painting his art around the city. Now, he's gone inside with an exhibit at the MTS Gallery in Mountain View. His work looks intriguing.

It reminded me of the art Jon and I saw as we drove through northern Arizona last month. Photos & drawings, enlarged to life-size or larger, were glued onto abandoned buildings and old water tanks. All the works were along two-lane highways through reservation land. I don't know who the artists are, but Jon made a u-turn to take photos of the first site. After that, whenever we saw something, he pulled over and grabbed the camera. I wonder who made them and what statements they were trying to make. 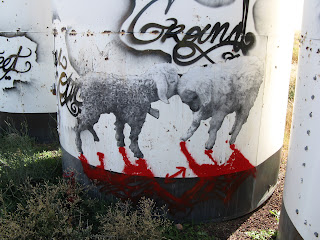 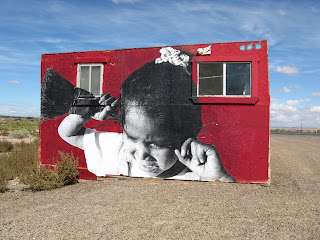 along Highway 89, north of Flagstaff, AZ 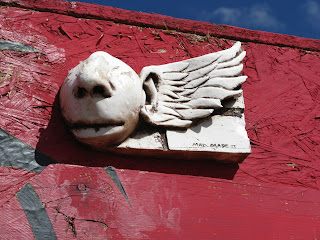 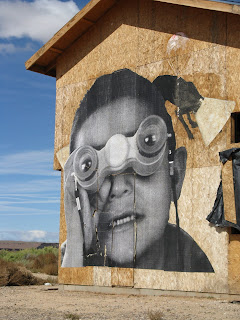 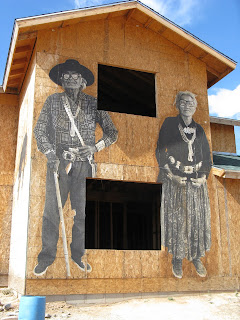 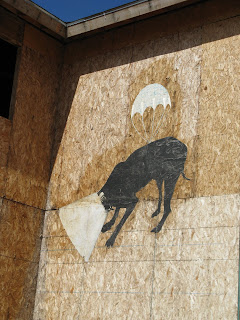 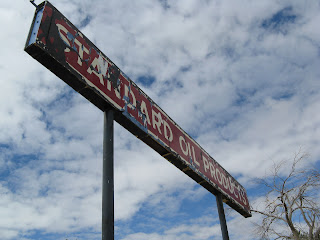 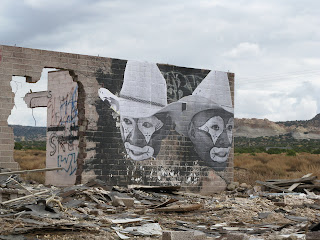 At the abandoned Standard Oil station on Highway 160.

Do you know the artist(s). I'd love to give them credit.
Posted by bikegirl at 12:16 PM

Looks like you were on an artsy scavenger hunt! Someone adhered a small mural to the back corner of my office in downtown Anchorage. It looks like a photo of the lost boys of Africa, but could just be some skinny intercity kids in the US. No idea how it got there. I should take a photo. I'm curious if anyone else has noticed similar works in Anchortown.

Some of Meno's tags are up on Boniface. His friend, Bisco, also does a lot of the tags around town.

The Brazilian art and culture shown to the world through the blog of Brazilian artist NEWTON AVELINO www.aartedenewtonavelino.blogspot.com