when life hands you rain 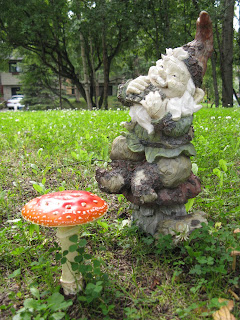 and one day, he sprouted in our yard!
For 28 days it has rained. It's official. Longest stretch of rainy days since the record keeping began here in Anchorage. On Thursday I strolled around Downtown. Not many tourists; I parked on the street next to Town Square Park in the early afternoon. The flowers, washed with rain, were bright in contrast to the sidewalks and the gray sky.

I walked toward Elderberry Park. Two bicycle rental companies are positioned just a block away from the park which provides easy access to the Coastal Trail. Bikes lined up, covered in rain, waiting for brave customers to take them out. A rough summer for bike rentals. More fenders would help. And a little sunshine.

Later, in a coffee shop, a group of 20-something women wore the trend in summer fashion 2010: skirts and tights with Xtratufs. Their guy friend in soaked running shoes. But, for all our sun deprivation, in the forest and along streets and trails; in yards and parks around Anchorage, another source of vitamin D is emerging from the soil to feed us. It's mushroom season. 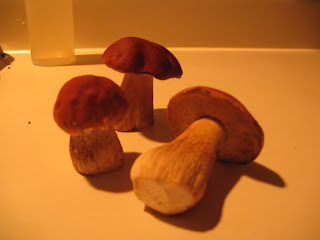 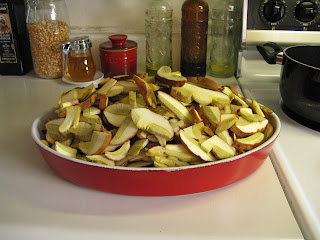 Boletes (we call these "yellow caps") ready for
sauteing, then into the freezer for later. (My job.)
The time of year when Jon fills his backpack on his commute home from work; devises another way to cook the fast-growing wonders for dinner. Then after dinner, spends the rest of the evening brushing and slicing, examining and laying out on trays, loading boletes into the dehydrator. In the morning, the garage smells like mushrooms. Laundry hanging to dry smells like mushrooms. It won't stop until. Well, we've heard the blueberries are ripening in the mountains.

The next season moves in like another chapter. He'll leave the fungi-collecting commute, trade it for the car and a larger backpack, an optimistic number of empty containers and head for the mountains after work, squeezing every possible minute of picking into the fading daylight. Another season; another obsession. Another meal; another nod in appreciation. Full freezer; full pantry. Enjoying the harvest through the long winter.
Posted by bikegirl at 10:19 PM