good to be out 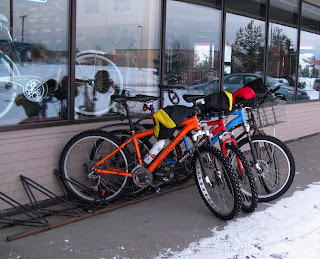 commuters
Sunday I had a lovely commute to and from work. Snow was falling in the morning and I didn't have to rush to get there on time. It felt good to ride the route with snow under my wheels. On the way home, Jon and I took our favorite little commuting route through the woods - Lynx Trail, Moose Track, Salmon Run. We stopped to look at the ice on the creek. Not too cold. It was nice to be on a route I know so well riding by the light of my headlamp.

Truth be told, up until Saturday yours truly hadn't been outdoors on the bike in a week. The temps were rising but instead of riding to work, I have been in the midst of making changes. If there's one thing a biking vacation tells me, it's what kind of shape I'm in. This year, not so good. Not enough long rides to make long rides in the sun easier. It didn't help that I acquired what I called "desert crud" just a week into the trip. Darn cough morphed into bronchitis, the other reason I thought I'd stay indoors.

Instead of subjecting my sad lungs to the cold, I climbed on board the trainer. I know, I know! But sometimes it's the only way. The happy part is that the new trainer we have is less boring than the old one. It rocks! Literally, it rocks. It's a Kinetic Rock & Roll and it sways from side to side when I ride. I think it makes it more comfortable because it's more like riding on the road, but without the fear of crashing on rollers.

The other change is that I'm trying to make time to go to Pilates. It's been ages but I went to last Monday's class and my abs still hurt when I arrived at the Wednesday class! I'm not big on suffering, but feeling that muscle soreness told me one thing: they were working.

One thing that keeps me from going to Pilates classes is that it doesn't work with my bike commute. So my goal is to find a balance of enough commuting, enough Pilates and enough riding on the trainer. Plus knowing when to say "enough!," and push away my dinner plate. Now that's hard.
Posted by bikegirl at 9:50 PM

Ughhh...tell me about it. I'm on limited exercise, but does my stomach say "No, Tapia a couple bites of Ben and Jerry's is plenty"? Answer: It's NEVER said that.