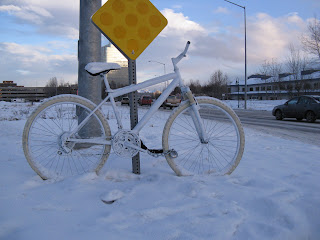 A few days ago, Jon and I were driving through Midtown and saw a Ghost Bike. It was white, covered in frost -- a stark sight. I hadn't known it was there, but quickly realized that this was a memorial to a young man whose name I didn't yet know. I found out later it was placed at the intersection after a memorial ride, attended by about a dozen cyclists who then dispersed into the wintery night.

There's no name on the bike. But it was placed there in memory of Jonathan Johnson. According to the local paper, Jonathan was struck by an SUV on October 20th as he rode his bike through the intersection of 40th Avenue and C Street. It was during the early morning commute. He was 19.

I didn't know him, but I did learn that he was the oldest of six kids. Anyone who has lost a sibling suddenly, tragically and so young can relate to the grief that this is causing them. As his brothers and sisters mark life’s milestones, they will hopefully grow into adulthood and lead satisfying lives while Jonathan will be forever remembered as he was. Nineteen.

Today I stopped by the site and stood near the bike as cars zoomed past or stopped at the intersection. Nobody asked me what I was doing, what the bike meant. Maybe they knew. Maybe they weren't curious enough to ask. As I crossed the street back to my car, the walk light came on and two cars made right turns in front of me before I could step off the curb. That's Anchorage. We must be ever vigilant. 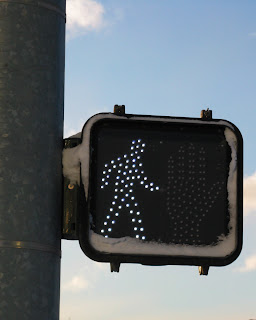 Thank you for telling us about Jonathan Johnson, a sad true story.

I work near there and noticed the bike there several weeks ago. It wasn't until a batch of roses appeared on the bike yesterday that I made the connection to the accident. I can see the accident site from my office window and was very sad when it happened. The bike seems like a good idea, but I wonder how long it will stay there until the authorities remove it.

Oh, and the bike isn't white because it's covered in frost. It's actually painted white. The pedals have been removed, perhaps in an effort to prevent some thug from stealing it.

I should add that there's a website that explains the origins of the Ghost Bike as a way to memorialize the rider and make people more aware. http://www.ghostbikes.org

Often I think drivers need to be reminded that every cyclist is also a person who feels pain, experiences emotions and is incredibly vulnerable out there. This bike certainly reminds me of my vulnerability. The way it's painted all white, including tires is subtle and at the same time very powerful.

When I first saw one in Seattle last fall, I had a hard time putting it out of my mind. I'm having the same experience with this bike. It feels very personal.

this breaks my heart. we've had a few unfortunate and terrible losses out here in the bay area recently :(
thanks for bringing awareness
xo/ m

Yes, I was riding down C Street two Fridays ago, not my normal commute route (Bears Tooth bound).

I saw the ghost bike and knew immediately what it was about... I recalled the event and was shaken by the memorial - but appreciative - and anxious that someone might take it down... shared the story with a friend, and he didn't get it - nice blog.

I haven't seen the bike yet, but hope it will cause drivers to be more aware. I hope that one day it will be a given that bicycles are all over the place (just like motor vehicles) and that we can go where we need to go without a lump of fear in our throat.

Thanks for explaining the white bike we've been seeing for several weeks. We guessed that it was a memorial for a bicyclist. Now we'll think of Jonathan when we pass it.