Europe Trip, Part 3.
There may be no day finer than that sunny day in the fall that follows two weeks of rain. That day when you step outside into the crisp morning and you know, you just know, it's a perfect day for a hike. And a city may never look as fresh and beautiful as Riga did when we left the airport and rode across the bridge toward the older part of the city, felt the suspension of the car as it rumbled over the cobbled streets nearly 20 hours later than we'd planned. And a buffet may never fill my eyes and imagination as completely as did the spread of food laid out before us in Lido after having only coffee-stand food available to us for the previous 19+ hours. I was hungry, but mostly I was tired. Tired from our original flight from Alaska; from our running around on minimal sleep in London; from my almost sleepless night in the airport. From all the pleading and planning we'd done while in the transit zone. My body was tired; my mind was even more tired. But I filled my plate; ate my fill; then Jānis pulled out a birthday cake. He, Jon and Marcis (Jānis's friend who was driving around) added candles, lit them and sang me the birthday song. So was the celebration as I finally enjoyed my birthday on September 21st in Riga, Latvia.
But things didn't stop being challenging. When Marcis dropped us at the apartment, we fumbled several times with the security code to get us into the building. Finally, after multiple attempts entering the code our host had carefully written on a business card, it worked. Then, in front of our apartment door we learned something about European locks: Put the key into the lock. Turn it once. Turn it again. Maybe, turn it one more time to finally unlock the door. Guess we didn't notice those instructions when she showed us the keys and it was not easy to figure out when overtired and already starting to dream while still on our feet. But compared to our sad room in London, the flat in Riga was a treat. Spacious, with a bedroom and a living room with kitchenette. Our own private bathroom! We found the extra duvet and climbed into bed for a very good sleep.

That first morning of freedom in Riga, Jon and I got up and walked down the street toward some shops we remembered from the night before. Just over a block away we found a small coffee shop with beautiful pastries in its window. We stepped in, looked at the menu, relieved that cappuccino is a universal term. We ordered two. Pointed at two pastries for breakfast. Meanwhile, another customer who was standing at the counter drinking a glass of wine tried to speak to us in German (I don't know why) while the shopkeeper scolded her to leave us alone. When it was time to pay, I pulled out my credit card and the shopkeeper shook her head. I pulled out my cash. And although her prices were listed in both Euros and Lats, she would only accept Lats. (Latvia will finally adopt the Euro next January.) I still didn't have any. She pointed across the street and told me: "Bancomat." Yes! I hurried out to get Lats from the cash machine while Jon waited.
Ah, the freedom to come and go; to walk across the street to get cash; to choose where we want to sit and eat. I returned and we relaxed with our coffees and watched other customers come and go, their pastries placed in boxes that were then tied with string. We enjoyed the fresh flowers on our table and in the windows. Soon we were strolling around our neighborhood, looking in shop windows, noticing people carrying flowers. We peeked through arches and passageways and found an open-air market. Vendors sold meats, cheeses, produce, clothes. Some sold flowers. I remembered seeing two vases in  apartment. We'd be there for a few more nights. Let's get some flowers, I told Jon. I chose some gladiolas and cradled them until we were home in our apartment.

We headed out again in the afternoon with Jānis as our tour guide. The day was rainy, yet the water only made the cobbles more shiny, the umbrellas and statues more picturesque. I pulled my newly-purchased umbrella close to my head as wind blew in. We wandered into churches, one that was damaged during WWII by the Nazis, then neglected during the Soviet era. It was nearly empty of people on that Sunday afternoon. A woman sat near a donation box and told us of the slow renovations. I deposited a few coins as we prepared to leave. When we got to the Russian Orthodox church, I covered my head with my scarf (as the sign requested) before entering. The church was filled with devout worshipers who purchased candles that they placed in front of their chosen saintly icon. They lit the beeswax candles and began their prayers as we quietly looked at artwork that filled the walls. Potted flowers left in front of statues were cleared by nuns who moved silently through the building. A dome overhead was being renovated. It was clear that the orthodox church was bringing in lots more donations than Old St Gertrude's.

We strolled through the narrow, cobbled streets of Old Riga, which was nearly empty of other tourists, craning our necks as we admired the roof lines of the centuries-old buildings. We endured the rain until the chill and our appetites sent us into the interesting-looking Restorans Dārzs (garden). A paper-mache sculpture of a man seemed to fly overhead in the main dining area. We sat at a table by the window and ordered beers. The food orders seemed slow to arrive, especially since we were quite hungry, but once they began... 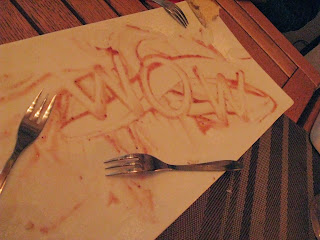 locally-made cheeses, a tomato soup which Jon declared made him like tomato soup, beet soup, zucchini (with more cheese), barley risotto with pesto and a chocolate dessert we nearly licked off the plate! Besides the creative food, the restaurant invited exploring.

After dinner, we walked toward the Daugava where it seemed the wind-whipped rain was being swept from the river. We briefly explored the riverfront, and then walked back to our apartment, the guys getting even more soaked along the way. We invited Jānis to stay the night on the sofa and the day ended with more chocolates (Latvians seem to love their chocolates, or maybe it's just Jānis) and drinking the traditional Balzams herbal beverage Jānis had bought the night before.

It was good to be tired out from all the walking, but eventually we needed to get our sleep, for the next day was Monday. Embassy day, when we would get our new passports.