Something from last week has been on my mind. While Jon and I were driving to Seward for our weekend camping trip, I brought up something that happened earlier in the week. Along the shores of Turnagain Arm, just south of Anchorage, a woman's body was recovered.

Her name was Martha and she was someone Jon had known years ago, having dated Martha's then-roommate. I had met Martha a few times through the Alaska Women's Environmental Network (AWEN) and at the Alaska Center for the Environment (ACE). But neither of us knew her well. When a news report had listed her as missing, I worried. Her husband had said she was "despondent," not answering her phone, hadn't shown up for work. They found her car, then they found her body.

As we drove along the Arm, I told Jon how I wondered what the husband had meant by despondent, because in the past few weeks I'd had days in a row where I felt so low that even riding my bike didn't interest me. I'll admit now that I didn't answer the phone. I did go on a hike with one of my friends and when it didn't cheer me up, I told her I'd had a problem with this depression for a long time. She asked for how long and I told her since I was a teen. My friend seemed to not know what to say. I wondered if I'd made a mistake or maybe she just needed to think it through. A weight settled inside me and we dropped the subject. I've never told any of my other friends about my depression. Jon is the one who sees it, encourages me, knows that at times I am inconsolable. Listens to me when I tell him "This is not how normal people are!"

Now I was scared. What had happened to this woman who had been a light in the community, a leader, a warrior for the environment? What about me? What was to stop me from getting to that point where I could not go on?

Jon asked if any of my friends knew Martha, and because I use social media a little more than I like to admit, I told him a few were. Why not ask them if she had a problem with depression, he suggested. I was doubtful. Look at me, I reminded him. I tell nobody. Throughout our lives, we act. We have our public side, then we have the side we show our partner and very few others - if any. Jon and I talked about why this is the case. And what we agreed is that people with depression are afraid we will be judged. Judged for being weak; for not appreciating all that is before us; all that we have; be it family or friends, possessions or just a brilliant summer day.

Two weeks ago, I was very down. There was little that would make me smile. I didn't want to smile. My energy was drained, but I convinced myself that I should do some research and the book I needed was at the library on the university campus where parking is pricey. I dragged myself out of the house, climbed on my bike and rode the few miles to the Consortium Library (where I discovered that I'd forgotten my note with the book title, forcing me to speak with another person). Eventually I found the book, checked it out and biked home.

I rode through a route that goes between my street and the nearby school, through a cul-de-sac to an intersection. As I made my turn, something in the rock garden on the corner caught my eye. I hit my brakes. Two perfect boletus mushrooms were pushing through the loosened soil. I looked at them. Allowed a smile. I considered picking them, wondered if my neighbors knew what deliciousness was growing in their yard. I left them, in case the family planned to pick them for dinner. Later in the evening, when Jon called to say he was leaving the shop, I told him to be sure to bike past that house and notice the rock garden. He arrived not an hour later with not two, but three mushrooms from his ride.

These little unexpected moments of joy can pull me from my malaise as if a switch has flipped on a light. I've often wondered if these deep canyons in my mind magnify those moments of soaring happiness. Do I experience life's highs more intensely because of the mental distance traveled to get there? Because when I'm in that headspace, I can see that this is indeed a beautiful world.

But just like knowing that the day-after-day sunny weather we've had this summer will ultimately end with skies that cloud and bring rain, I know the down days will return. I will wonder again how many days the darkness outside or within will last. I will try to keep myself busy. Try to not leave too much time to ponder my failings, my inadequacies, my insecurities, disappointments. Those things that lead to the downward spiral. I will try to focus on the positive moments for as long as I can. Try to link together as many good days as I can, continuing to focus on the simple beauty around me. 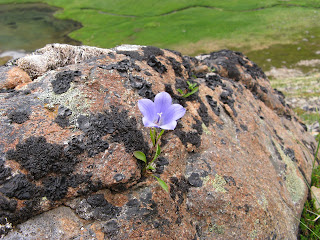 postscript:
It has taken me a few days to write this and I'm still nervous as hell about posting it. I did call a friend who is listed among Martha's friends on social media. While their interests sometimes overlapped, they were acquaintances and he had no knowledge of the struggles Martha went through. I'm glad I spoke with him. He's a writer and a teacher of writing, an observant and generous person. Though it was tough sharing with him my reasons for being concerned, his encouragement told me I needed to complete the thought.

For my friends who may be worried, I'm mostly okay, though I've found it's much easier to mend a shoulder than a mind and not nearly as hard to speak of a physical ailment than a mental one. I realized as I was riding my bike on some trails this Wednesday that part of what compels me to share this story is this relationship I have with words. If I can give voice to these feelings; if I can speak its name; if I can call it out; if I can tell the world it's lurking, maybe I can take away its power. So, call it my flip-off to Depression. There. I've said it's name. Yet I am so nervous about hitting the "publish" button, the real moment of truth.

post postcript:
We've had a couple rain storms in Anchorage in the last two days. I'm okay with that.
Posted by bikegirl at 3:56 PM

Dear Brave Rose,
I am so happy to see your new posts in my inbox and, over the past year or so, grown increasingly excited about your essay and honesty. You have been through a lot with the shoulder recovery and were honest and clear about that process in your blog. I remember that writing well. As I will remember this writing well, too. For what it's worth, nearly 50% of the US adult population is on some form of anti-depressant and the "stigma" of depression or mental illness that exists today grows thinner and thinner...in fact, in my circle of like-minded friends, there is no stigma at all. We are all beautiful people trying to make our way, speak our truth, and live well. We all have to get there our own way, and sometimes that's two steps forward and one step back. Your highs lows have the power to make the world sparkle or fade, and your awareness and bravery make you that much more interesting, real, and wonderful to know. I'm so glad you've written this, and that you found (some) of the answers you needed regarding Martha. Funny, how I was just thinking of you at lunchtime today, wondering if I'd make it back to Anchorage this year and get to have time with you -- your sweet smile, your endearing eyes, your good heart. I sure hope so. Love love love up to the long-lasting sun and back! xo Katey

Thank you Katey. Like everything, it's a process. In the last few days I've felt a bit of weight lift. It is evident that all my fears and insecurities have kept me from writing as bravely as I want. But when I do, I know it has power. I appreciate your supportive words and I do hope you come up for a visit. Be sure to let me know when you do!

Thank you for this post, Rose. Martha's death reminds us that even beautiful and talented people experience depression. Your post is hope that many of those people also know that, like the Alaska spring, the light will return, and that so many more do hold on until it does. Wishing you bright beams, my friend.