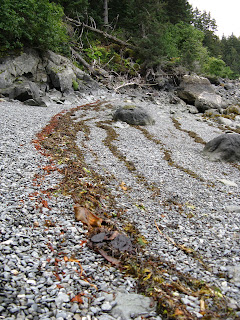 Tutka Bay, Alaska, September 4, 2010.
Taken while on a stroll during the 49 Writers retreat.
Lately, I've been thinking a lot about the high water line. How high is the highest tide? How high will the flood waters rise? What washes up on the tide? Tsunami debris has begun washing up on some Alaskan shores after spending over a year on the ocean. Some has been returned to the owners. It has only begun.

This year's retreat leader at Tutka Bay is Pam Houston. Only a few spaces left. Still tempting.
Posted by bikegirl at 8:30 AM