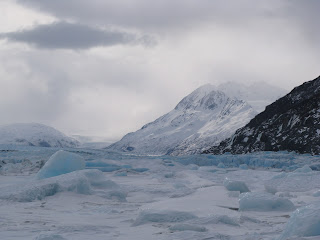 Wind rides down from the glacier face.
It sweeps in from the Sound
climbs over the mountains
traverses the snowfield
then gains speed as it courses
between arêtes
that confine the ice and steer it
ever toward the inlet.
Lifting snow and silt as it blows
rattling across ice
and sastrugi
eroding ancient blue bergs
and this year’s drifts.
With the wind at my back,
I hear the grains skittering. 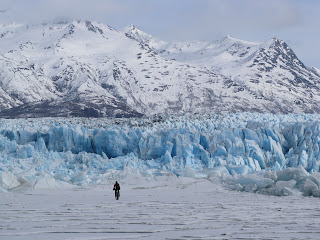 Much of the day, the wind passes my ears
White noise,
drowning any sounds from companions.
We four, not being savvy with hand signals
used by those who regularly are out of shouting distance
or have neither voice nor hearing,
must stop to communicate.

We tuck our heads
to keep the wind from our cheeks
Yet, must keep ever alert
for slick spots,
thin spots or holes in the ice
that might suck one of us under.
We pedal
On track to reach the face
It appears closer, though not by much
We ride on snow
On ice
On river rocks that range in size
from aspirin to dinner-plates
Keep pedaling and we can ride over anything
Unless it is the shape and size of an upturned wok. 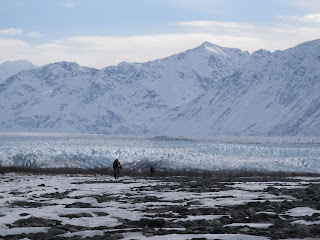 V.
Another day
Sun pouring
reflecting off snow
blue ice, white ice
river ice, lake ice.
blue bergs frozen in lake ice
sculpted with dimples
locked as they are and still.
Ancient sea creatures
with scales,
breaching.
We ride past
raise our faces to the sky
wonder at the frozen waterfall
like drizzled icing on a wedding-cake.

At the face of the glacier,
we leave the bikes on the ice
climb onto the sun-warmed rocks
like desert reptiles
after sundown
seeking the residual warmth
the memory of sunshine.
Packs propped against glacier-carved rock
We recline and prop up our feet
look around
remember the distance we have traveled
over the last two hours.
Sun-drenched
we watch as flight-seeing airplanes
fly low across the ice
wonder if they see us resting there
wonder whose album we will end up in
when they return to the rest of America. 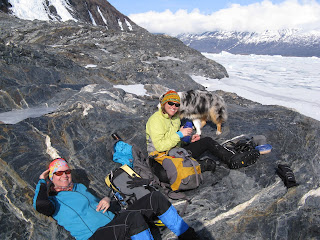 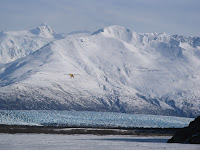 We meander close to the face
pass along uplifts
highmark on our bicycles
Ice made grippy by blown snow and silt
embedded in the surface in drifts and waved patterns.
We take our time
Exploring
Riding over sea creatures
Watching the March sun move across the sky
Marvel at the intensity of light
absence of wind
With a note of sadness
we turn back
skirt along the base of the moraine
and ride along ice made softer by a half-day’s warming.
Snow softening, water running, slick. 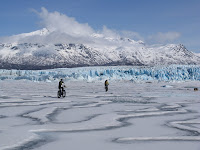 Like a good novel
or movie
the end is sadness
and satisfaction.
I hesitate before leaving the trail,
already nostalgic
for the day. 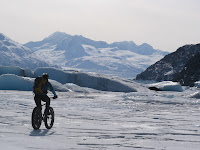 From a series of poems on biking on ice and snow. I began these during last week's write-a-thon. They are all works in progress, partly because a poem never seems done to me. It's not like a cookie where you can tell by the edges that it's just right. With a poem, you can change a word to change the mood or the meaning.

Over the years, I've found that poetry helps me with my other writing. Sometimes when I'm trying to write a story, it's best to pare it down to find the essence, then begin building. I don't know if other people do this, but it feels like a good form, kind of like stretching my brain before doing the heavy lifting. Thanks for reading.