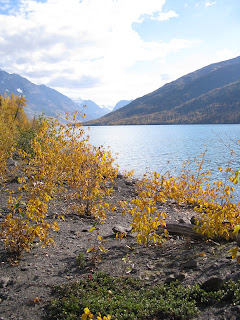 Lakeside - we're heading around that bend.
Last weekend, my friends & I made our annual fall trip to Eklutna Lake to spend some time at the Serenity cabin. When we began this tradition a few years ago, it was a one-night trip and maybe a half-dozen of us signed up. It rained as we biked to the cabin and it rained on our return trip. The firewood was limited and what was there was mostly wet. We had a great time.

In 2008, we extended the trip to two nights to give us a chance to spend some time exploring on the non-riding day. We hoped for better weather. More people signed up. After a summer of rain, we had glorious sunshine. Last year we had sunshine too. I'm not even sure if this was our fourth or fifth year, but after that first year, we've been pretty lucky.

This year, we booked the cabin for three nights, giving everyone extra time to hike and to do their own thing: reading, writing, adventuring. The trip has gotten so popular that we had a dozen sign ups before we even sent out the announcement and had a wait list up until a week before the trip! People really look forward to it, and it's not just the wine.

This year, the last weekend of September felt like the last hurrah for sunny weather. By the time we left the cabin to return home on Sunday afternoon, we had a headwind and wet, over-sized snowflakes. In this case, timing was everything. 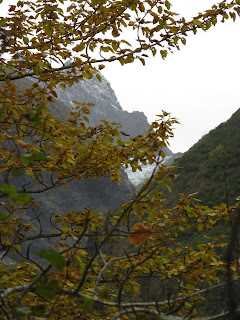 Fresh dusting of snow on the peak above Eklutna Glacier.
(This is the view from near the front door of the cabin.) 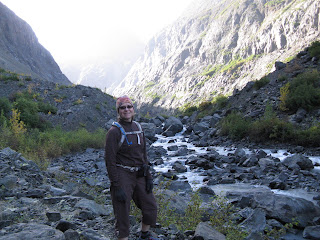 Friday hike. This time of year, the sun only shines on
the upper valley for a few hours each day before slipping
behind the mountain. This made for slippery footing on
the frost- and ice-covered rocks. We did eventually make
it to the sunny zone where some of us contemplated making
a river crossing in the glacial water. Maybe next time. 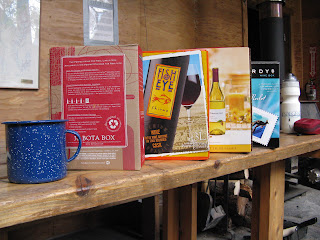 Meanwhile, back at the cabin... 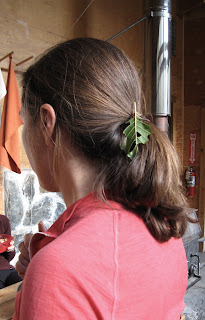 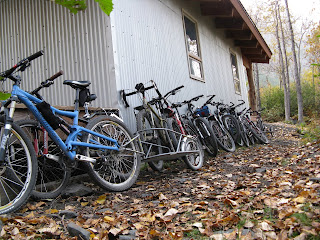 Line 'em up! Mine is the one with the drop bars.
The cabin is about 12 miles from the trailhead.
No electric, no wi-fi or cell service. Just away.

Early Saturday morning, a 5.4 earthquake jolted
many of us awake. Those who didn't initially wake
up did when they heard the shouts: "earthquake!"
coming from the other bunks. 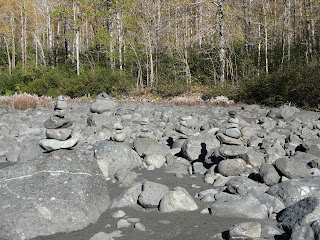 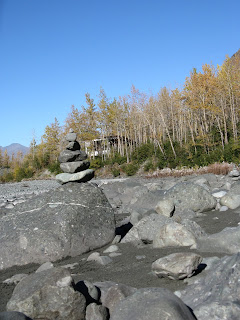 Rocks, Birch & Cabin.
The river changed course since last year, filling
a different channel and leaving the riverbed below
the cabin as a playground of silt and stones.
The Rock art is by Corinne. 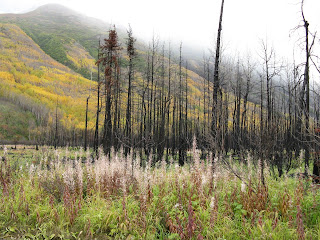 Riding home through the burn area with snow falling on the mountains. 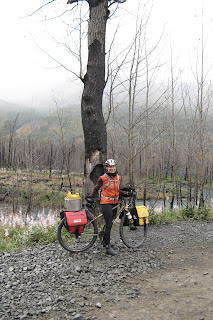 My old friend.
This old cottonwood tree survived an avalanche a few
years ago, though it was scarred by the force of the slide.
This year it was burned in the late May fire. Someone drew
a heart in the charred scar. I wonder if it will live. It's a
tough old tree but it can't survive everything
nature and humans throw its way.

(And, yes, that is a big cook pot on my rack, but it was great
to have it at the cabin when cooking for a dozen people!) 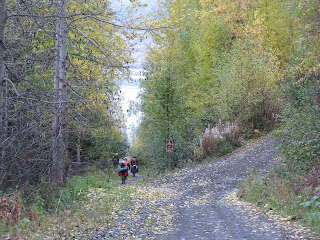 Riders returning to the trailhead on the Lakeside Trail.
We met lots of people on ATVs but they were all very friendly.
I even got one "you go, girl!" while navigating a particularly
rocky section. 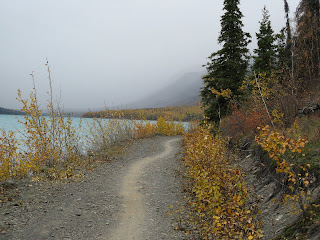 Wind and snow, but still so beautiful! 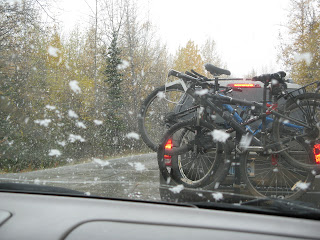 Bikes on Bev's car. The snow was worse on the
road than it was on the trail. That's timing.