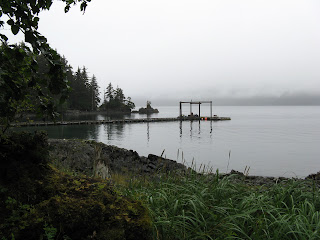 Just days after returning from two weeks in Wisconsin, with my mind still ricocheting between my sadness and my relief at being home, sinking with the weight of Dad's death and Mom's subsequent move into an assisted-living apartment, I got into my car for the long drive to Homer. A part of me didn't want to go to the writers' retreat even though I'd signed up for it a few months in advance. A part of me wanted to stay at home and try to sort through my thoughts under a familiar comforter.

But a long drive, followed by a short trip in the water taxi brought me and the other writers to a small cove on Tutka Bay. Sunshine poured onto the expansive deck and four of us swung in a hammock, getting acquainted, momentarily oblivious to the group gathering for a brief orientation. Later that afternoon I took a stroll alone to Rocky Beach. I watched an otter curl its shiny body into the water, waited for it to break the surface and float on its back, cracking open a shell and eating the contents. Repeating the process.

My thoughts moved from wonder at the surroundings to sadness at my loss. And not just my loss, but Mom's loss: loss of her husband of 57 years; loss of her memories, carefully recounted in stories; the sudden but necessary move. Her confusion seemed to have scattered my own mind, leaving me with the wrong words on my tongue, words spoken out of order. I wondered if I should be at the retreat. I didn't know if I could string thoughts and words together to create coherent sentences over the weekend. Or ever. 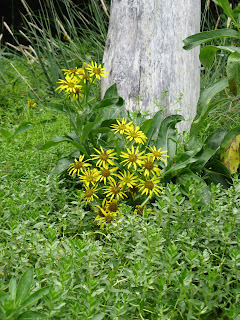 Late in the evening, after the hot tub, its water spilling over the sides from all the bodies soaking; after running down the dock, lowering myself into the bay, tasting saltwater, thick in my mouth as I went under; after showering and after the lights were out in the cabin, I slipped out to return to the deck.

Just over a week earlier, the woman at the assisted living center had asked: is your mom prone to wander? No, my sister and I said she wasn't, though that first night I'd spent with Mom, she'd walked down the hall to my room and asked, Where's Dad? Me: He died. Remember? He's gone. Her soft shoulders beneath my arms; new grief. Me, later, wondering, will she rise each night and leave her room to come looking for him?
A few nights later, having turned the guest room over to my sister while I camped on the living room floor, light entered the duplex. It wasn't quite midnight but the room was silent. The aged clock on the mantle hadn't been wound in days. I peered through the closed blinds, then walked to the front door. I stepped out into the driveway, drawn into the strange glow of the full moon. A good night for a walk. A warm night. But I stopped, glanced toward Mom's window. Upsetting the balance. Do not Disturb. Go back inside. I climbed back into my nest and dozed off.

I sat in one of the rocking chairs near the deck rail, notebook in my lap. The air was still warm after the sunny day and the breeze gentle on my damp head. I could hear the waves lapping under the dock, rearranging pebbles and shells on the beach. I tried to recall moments of the previous two weeks. I hadn't written much while in Wisconsin. Most evenings, instead of turning to my notebook, I'd been opening the book I'd been reading, an Alaskan book that pulled me away from the sadness and the frantic list of things to do, back to the pipeline days of Alaska's recent history. I read and slept. Woke in the middle of the night and read some more. My pen gave up after just a few paragraphs. I hiked back to the cabin and slipped under the covers, hoping my headlamp wouldn't wake my roommates as I continued to scrawl a few facts. I couldn't write thoughts.

In Tutka Bay, surrounded by water and trees, warm people and comfortable rooms, I wanted to spend my free time walking the coastline and trails alone. I was rewarded with otters nobody else saw, an eagle perched in a spruce high above the trail, whales that exhaled then dove back into the cool saltwater. And like the protagonist in a novel - center of their own universe - I believed all the creatures were present because I had willed them to be.
Posted by bikegirl at 6:00 PM

Write it! it does'nt matter what you write, but that you do. You can sort it out later.

Was glad to read this, and so very glad you came to the retreat. Thanks for sharing.