It's a lie, a fraud. The picture doesn't tell the entire story, so now I'm going to clear it up. Make it right. The thing is, sometimes I'm a chicken. Sometimes I'm a chicken right at that moment Jon hits the button that takes the photo and I'm captured pre-dab, pre-bailout, pre-scowl, just before I stop and say, 'Why do you always have to take a picture right at the hardest part? You know I can't do it!'

But he doesn't know. Jon thinks I can do most anything on a bike that he can. I just need to trust myself and try. And the thing is, most of the time he's right. Then again, once in a while, I'll do something and he will be surprised because he didn't think I could. I love surprising him on a hill climb with the sound of my breathing when I'm so close that if I'm not careful and if he slows down I'll tap his wheel with mine and come to a stop... Ah! I digress. 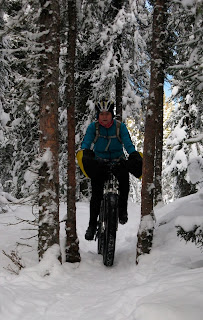 Ping! Early January, before I bailed.
You see, there's this tiny section on the Stump Trail, aka: Area 51, Speedway, Regen (choose your moniker) that I call 'Pinball.' When coming from the south, there's a tree on the left, then right, then another on the left in such quick succession that you have to go very slowly and make a quick flick of the handlebar to get through them, or, as one friend does: lean your shoulder on one tree and push off from it, hence, 'Pinball.'

Well, this little three- or four- foot section just freaks me out. I think I'll hit my handlebar on a tree and crash into the next, not a graceful (or painless) experience, I'm sure. So I ride up to it, slow down and do the sensible thing: I dab. I drop my left toe to the snow and push off, unscathed, but also not satisfied with my performance - though I'll admit, I'm very good at the single- and the double-dab.

The day Jon caught me in Pinball, he was sure I could do it. Later my friend told me his leaning technique. It made sense, but I worried that I'd lean and miss the tree, scraping myself along the bark as I fell into the snow, my steel-framed snowbike landing on top of me, my bloody face staining the snow. I've biked the trail several times since that day, always with a little dab and today was no different: I approached, slowed down, closer... dab! Ah! Then, instead of dropping down the hill, I stopped, turned my bike around to start back toward the trees.

I noticed the birch and spruce trees around me, snow draped over downed trees and bent-over branches. I noticed a bike imprint in the snow on the side of the trail. 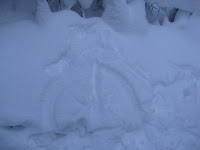 The air was still and balmy, in the mid-20s. A perfect day for a do-over. I rode to the trees, slowly, slowly, dab! Uh! It was closer and it didn't seem as scary. I could do this, I thought. I rode up the trail and turned the bike around again, riding slowly, looking at the trees. Where should I look? I entered Pinball, wiggled my bar right, then left, slipped through. Ha! I kept going, then stopped at the top of the hill, turned the bike around. Must get it from this direction, too!

A few more passes from both directions, my handlebar poagies rustling as they brushed against the trees. No dab. I pedaled, slid back on my saddle and dropped down the hill. Pinball was mine! Sure, I'll have to ride the entire trail to know that I truly have it, just like a figure skater: it doesn't matter that you can land a triple lutz in practice, you have to be able to land it and finish the routine.

I finished my ride and thought of the other Pinball-like sections that have trapped me before. Now that I have this one, I should be able to do others. It was just a matter of stopping and being willing to try over and over. It certainly helps to have a warm day for practice. 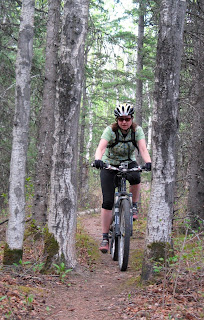 Kepler-Bradley, last May, just before my bar hit the tree.
(See my left foot about to evacuate?)
Posted by bikegirl at 4:48 PM

I love Pinball. It's that skinny passage through the two trees on Baseball Boogie that gives me pucker.

There's no wiggling required there, unless I'm an inch off on either side and wack one end of the handlebar -- which I've done several times. At that point, I wiggle to stay upright.

You kids and your wide riser bars gettin' into trouble. Old school flat bars = no problem. Maybe granpa was right after all.

Flat bars rock. I think I even read that somewhere.

No T: so many skinny passages on BB but I think I know the one... Though they don't annoy me as much as the ramp over the downed tree. I'm always climbing w/no momentum & the brain says "NO!" Maybe after vacation...