keeping it real at the book fair 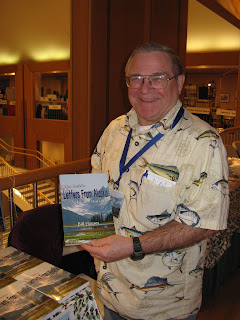 Bill's book about real Alaska...
details below...
Snow came to Anchorage this Thanksgiving weekend, and had I not previously made a commitment, I would have stayed home on so-called Black Friday to read, write or stroll through the neighborhood and around the bog on snowshoes. Instead, I've spent the last three days at the Anchorage Museum selling my book at the annual ReadAlaska Book Fair.

I was a little cool to the drudgery of getting up and driving through several inches of snow on the unplowed streets on Friday. I put the shovel in the car just in case, but lucky for me the bad drivers were either in another part of town or already in a ditch.

The museum, with its spacious expansion, was filled on the first level with vendors selling a variety of hand-made art, including jewelry, stained glass, hand-dyed shawls, turned-wood bowls and native carvings. Each morning, I strolled past a few artists then headed upstairs to the mezzanine.

The idea of the fair is to promote books that are published in Alaska. Most titles are by Alaskan authors. Art books, kids' books, memoirs of Alaskan experiences. History, fiction, guide books, science, calendars.

With all the authors on hand for signings, it sometimes feels like a social gathering just for us. But we also want to sell our books - lots of them. Each author has a little something they say about their books and I love listening to the hooks they use to draw in the sometimes-shy customers. 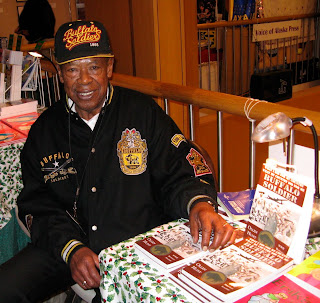 Ollen Hunt, a real Buffalo Soldier.
This is my second year sharing a table with one of the most popular authors published by my distributor. Ollen Hunt is in his mid-80s and is popular with people of all ages. One of his pitches: "You're looking at a Buffalo Soldier from World War II." People stop. Thank him for his service. They're drawn in and listen to him talk about Italy, Germany and Alaska. There aren't many African-American solders from his era left, but people remember the injustice that soldiers often faced when they returned to a racially-divided country. And since he's of the same generation as my dad, I sometimes feel like he's telling the stories my dad doesn't often share.

Another author, with his first book out this year, is Bill. I thought Bill would have a tough job getting his book to stand apart from the other personal accounts of Alaskan experiences. But his pitch is great. He'll tell the people strolling by, "These are real Alaskan stories." "Oh yeah?" someone might ask, to which Bill answers, "Yes, and mine are non-fiction." What I didn't notice until today was the sign he pointed to when he made his point. Once he broke the ice, people were laughing and ready to chat about his book, page through to look at some photos and maybe add it to their stack. 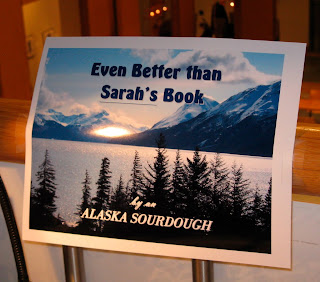 finding real Alaskan stories at the book fair.
With all the recent hype about what's real in our country and our state, I appreciate the authenticity of these guys and many other authors who have labored, sometimes for years, for the right words, the best photo.

The book business is a tough business, especially when people don't believe the recession is over.
Authors put in their time, energy and emotion; they agonize over the right words, then after they’ve typed the last period of the last sentence, they have the job of wading through the often grueling editing and publishing process to get their book to market. Having someone decide to buy your book directly out of your hands is a pleasant reward.

Even people who don’t write know that writing is a sometimes lonely, solitary process. What they don’t know is that signings in book stores are usually solo events where the author may be singled out at a table at the end of an aisle. Disinterested people sometimes veer away as though the author has a full-blown case of H1N1. By contrast, the Book Fair is a celebration of what each author has achieved, with many authors sharing tips and offering encouragement, a little smile or a thumbs-up. I don't think the shoppers see this, but the mezzanine sometimes feels like an office party where we all just got promoted. And I always leave with something new to read.
Posted by bikegirl at 8:44 PM

How do you keep a people down? ‘Never' let them 'know' their history.

The 7th Cavalry got their butts in a sling again after the Little Big Horn Massacre, fourteen years later, the day after the Wounded Knee Massacre. If it wasn't for the 9th Cavalry Buffalo Soldiers, there would of been a second massacre of the 7th Cavalry. Read the book, ‘Rescue at Pine Ridge”, and visit website/great military history, http://www.rescueatpineridge.com